I grew up in the suburbs, about 10 miles west of Baltimore City, went to predominately white schools and only knew of “the city” as the Inner Harbor. My lens was very limited. Shielded by my own blindness, it wasn’t until I entered high school that I started becoming more aware of the other Baltimore. Now I see Baltimore in a different light, with a new set of eyes and often at a loss for words for what I’ve learned about my birthplace. But I have hope that this place can be a more unified community.

In a 2014 Baltimore Sun article titled “Where are the men?” Brandon Scott implores Black men to become mentors. This was written a year before the Baltimore Uprising. The problems in Baltimore started long before Freddie Gray’s death.

In wake of the murders of Philando Castile, Alton Sterling, Sandra Bland and countless others, many people are just angry. Angry at the system, angry that police are not being held accountable for their actions, angry that #BlackLivesMatter doesn’t address black-on-black crime angry that there’s a lack of trust between law enforcement, government officials and our kids. What happens after anger? What do you do?

I’d like to highlight two organizations whose founders were born and raised in Baltimore City, and who share the same mission of helping inner city youth survive and thrive through yoga and mindfulness.

Ali and Atman Smith are the co-founders of the Holistic Life Foundation (HLF).

From their website: “The Holistic Life Foundation is a Baltimore-based 501(c) (3) nonprofit organization committed to nurturing the wellness of children and adults in underserved communities. Through a comprehensive approach which helps children develop their inner lives through yoga, mindfulness, and self-care HLF demonstrates deep commitment to learning, community, and stewardship of the environment. HLF is also committed to developing high-quality evidence based programs and curriculum to improve community well-being.”

They’ve been spreading knowledge and creating workshops around mindfulness and yoga throughout Baltimore since 2001. Born and raised in West Baltimore City, just a mile away from the infamous Sandtown-Winchester neighborhood where Freddie Gray was murdered, Ali and Atman weren’t your average neighborhood kids. They went to a private school, their family meditated every morning together before school, and they were vegan.

For the first eight years, Ali and Atman taught meditation and yoga to hundreds of kids each year. It wasn’t until they partnered with 1440 Multiversity that helped shift the trajectory of how impactful HLF can be and how many more people they can reach across the globe.

“It’s not all about doing the work. I think for so many years we were focused on doing the work. We were doing a lot of good work, but we weren’t focused on the non-profit side of things at all. Our heads were down, we were doing all types of programs, we were burning ourselves out. We weren’t looking at the nonprofit side of things: strategic planning, board development, cultivating donors, building relationships with foundations, just simple stuff like marketing ourselves or building relationships with Baltimore City Public Schools, or tracking data, or doing research—anything along those lines. The things that actually help you help more people, we weren’t doing.”

HLF has grown from helping 200 kids a week to 4500 kids per week in Baltimore City Schools, and they’re not stopping.

“There are people all around the world that need the skills we provide, and the cool thing about the way we think about things, we always believe the best solution is homegrown. Our plan for whatever city we plan on expanding to, isn’t for us to take all of our staff there, but for us to go and set up and find young people in the 15-24 year old range who are from the communities that they want to serve and training them to be able to do the work in their own communities.”

In order to continue the work of healing communities, Ali and Atman realize the importance of also teaching the youth how to heal themselves and teach others to do the same. This is something that had been instilled in their life from their father, and Ali teaches his son the same thing.

“One thing that I’m talking to [my son] about is that as you get older, life gets stressful. Life doesn’t get easier as you get older. So, you have this tool (meditation) that you can use to deal with stress, anger, depression, and fear. You can deal with all these things and kind of put them all into perspective. I know one thing that I’ve learned from my own meditation practice, is that when you start your day in the light, you start your day with your meditation, it kind of puts this force field around you. Things that people say or things that people do, that may cause you to get off balance or get angry, or sad or whatever is going on, meditation puts up that force field where it takes a lot more to get to you.”

“My dad always talked about mental toughness and inner strength and those are two things that he would never let us forget about as kids. I think that that’s something that meditation can help cultivate. When you’re able to take whatever that life delivers and not let it break you.”

One of HLF’s most successful programs is the Holistic Me After School program. The model is based on reciprocal teaching. Since most of the kids in the program live in neighborhoods that are underdeveloped, filled with crime and chaos, having the kids lead meditation and yoga classes is crucial to building their self-esteem. Through this, they’re able to go home to their loved ones and teach them what they’ve learned.

“The kids teaching and being teachers is what facilitates that change. I mean, we were just three dudes going around teaching this. Now that we’ve trained our students to be teachers, that number keeps getting bigger and bigger and bigger. Even though if some of these kids don’t come and work for us, they still have these skills and these tools, they know how to use them, and they’re going to use them in their own lives and they feel comfortable sharing with other people, so they’re going to help the people around them because they love them.”

“I think part of the answer is for people to get in touch with their inner self. People need to learn how to get in touch with themselves, and love themselves before they can learn to connect with someone outside of them, and love anybody else. But I think that’s only part of it. At some point, you still need the opportunities and resources as well. If you can go to a part of the city and it looks like something out of Beverly Hills, and you’re living in something that looks like some bombed-out third world country, and your schools look one way, the schools on the other block look another way, and the job opportunities aren’t there, you start feeling very hopeless and very angry. I think the meditation practice is necessary, but I also think opportunities and resources are also needed.”

There are plenty of resources available like HLF, but many of them have faltered due to lack of funding. Changa Bell served as a mentor and yoga teacher for an eight-week program comprised of a combination of juvenile offenders and foster youth.

“These kids have gold teeth and padded bodies, two of them had ankle bracelets on when I met them, under house arrest. They were all show. And by the end of the eight weeks, they’re vulnerable little boys and they give me hugs. I told them I love them. In our second to last class, I told the kids that the next time we’d meet it would be our last day together. The kids were upset and started getting up on their mats and said ‘you’re quittin’ on us like everybody else. Since you quit on us, imma quit on you’ And that hurt me a lot. ‘I’m not quitting on you, unfortunately this is what I do for a living and they don’t have the money right now.’”

So what do you do when the programs run out? Create your own.

Changa is the founder of the Black Male Yoga Initiative (BMYI) and is building the OM space, “a place for complete transformation. A place that turns the members of our society that are almost guaranteed to become negative statistics, to positive citizens via the power of yoga (discipline), meditation (connection) and mindfulness (awareness.)”

With the 2015 BMe Community Leader Award he received, Changa launched BMYI. “BMe shaped and changed my whole life in terms of the service and level of engagement that I was doing. They taught me that I can be bigger and provide bigger opportunities for the communities I serve.”

He’s on the ground every day with the young men of Baltimore, helping them to live a more holistic life to mindfully lead their communities for peaceful social impact, transformation and change. In order to seek the change and bridge the gap between communities, we need people to support programs like BMYI and HLF.

The resources are here. They just need to be supported so people like Changa, Ali and Atman can continue to nurture and mentor the future leaders of our communities. When people who look like the communities they serve are on the ground every day teaching and building, this is how change happens. When people like Changa, Ali and Atman actually care about the future generations, and create programs that teach the youth how to channel their anger into forms of healing, this is how we take action to seek the change we want in this world. 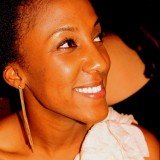 Sabrina's life mission is to inspire & empower young girls through fitness and storytelling. Over the past ten years, she’s mastered and applied a combination of development programs, events and best practices that incorporate movement and connect her local communities to a fun and new way of experiencing sports and fitness, working with the Miami HEAT and lululemon.